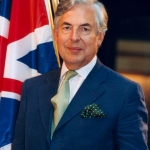 I didn't become an MEP in order to promote the EU. I want us to govern our own country. I go to Brussels to speak up for British interests and the people of the East of England.